In Loreto, you will find a region with a rich and vibrant history. Loreto was the original capital of all the Californias over 300 years ago. It was established in 1697 by the explorer Juan Maria Salvatierra, a Jesuit priest. You can see evidence of this history in the Missions, municipal buildings and the hearts and souls of the Loretanos.

Loreto is a natural playground for anyone who loves the outdoor life. Its azure, clear waters and tranquil coves provide scuba divers and snorkelers unparalleled underwater beauty and an abundance of sea life. Near the islands, the waters provide sportsmen with perhaps the greatest fishing in the world, with record catches of sailfish, tuna and dorado. The islands are easily visited by boat and such a trip will no doubt include sightings of sea lions basking in the sun on rocky coasts and dolphins leaping across the bow wave of the boat.

Sea kayakers glide through the warm waters of Loreto’s bays to camp at remote beaches and sleep under the stars.

For those who are more land-bound adventurous, the Sierra de la Giganta’s provides many opportunities for mountain biking, horseback riding trails and hiking over ancient trails used for hundreds of years. The locals say that this is “where the mountains come to swim.”

Visit the near by mission of San Javier, founded in 1699. It can be accessed by four wheel drive vehicles via a dirt road just south of town. On the way you will pass Cuevas Pintas, a cave painted by ancient peoples, and you’ll find Las Parras, a small vineyard. Be sure to look behind you on the way for an amazing view of the ocean.

In town near the mission is the museum which tells the story of the region from the era of the first inhabitants, known as the Pericués, Guaycuras and the Cochimíes – nomadic peoples who lived by hunting and fishing. They had the peculiar but ingenious custom of toasting undigested seeds and keeping them for the lean winter months; a practice described by the Spanish conquistadors as “the second harvest.” 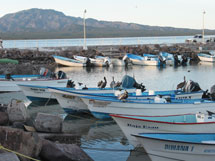 The town’s oceanfront has recently been renovated and is an ideal place for an afternoon stroll; or in the early morning, when the offshore islands appear like floating rocks in the Sea of Cortés.

One of the most interesting islands is Isla Coronado. It is five miles from the town of Loreto. The island hides a white sand beach which is ideal for snorkeling. A short hike across the island reveals the rich vegetation that covers it – an amazing sight considering the small amount of precipitation that is found here. However, beware. The island is home to an endemic specie of rattlesnake which, having no predators on the island, has evolved and lost its rattle. This makes it a dangerous creature to come across, due to the fact that its traditional warning sound to ward off intruders no longer warns humans of its proximity. 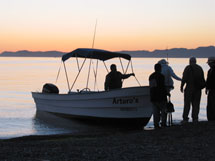 Just south of town is the bay of Puerto Loreto, also known as Puerto Escondido. As México’s largest natural marina, the tranquility of its waters make it the perfect anchorage for yachts. Puerto Escondido was described by the world famous marine biologist, Jacques Cousteau as “the world’s largest aquarium.” A large diverse population of marine species call the bay home as well as being the annual midwifery center for hundreds of whales. This has led the waters of Loreto to be declared a National Park.

The people of Loreto are warm, friendly and helpful. They welcome you to their town, their shops, restaurants and places of business.

On the your list of “must do’s” while in Loreto, is to visit the beautiful islands and see why the great blue, grey and humpback whales return here year after year.

Where to Visit Nearby

Santa Rosalia was formerly mined for his rich copper deposits. Its distinctive French architecture gives you the impression of being in another time and place. It is located 122 miles or 197 km north of Loreto.

Mulegé is found in a lush valley and is home to the mission Santa Rosalia de Mulegé. It is located 84 miles or 136 km north of Loreto.

Magdalena Bay , an outdoor adventure gallery, is a breathtaking bay near Loreto. The protected lagoon and mangroves are filled with exotic wildlife. Grey whales, which migrate here from Alaska every winter, are Magdalena Bay’s claim to fame. It is located 60 miles or 96 km from Loreto.

La Paz is the capital city and is located south of the town of Loreto. It is 218 miles or 351 km to the south.